May is Asian/Pacific American Heritage Month – a celebration of Asians and Pacific Islanders in the United States. A rather broad term, Asian/Pacific encompasses all of the Asian continent and the Pacific islands of Melanesia

On this page, you will find links to legislation, military contributions, and Asians in the United States congress.  You are viewing the page political participation of the libguide. 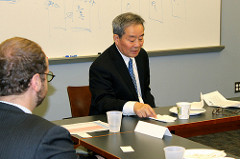 Asian and Pacific American polulation is a small percentage of the U.S. population, but their numbers are steadily rising. During the fast few decades, United States of America has witnessed few prominanat Asian American politicians.However, it is a very small number in both the senate and the House of Representatives. They are also a remarkably diverse population—representing several ethnicities, religions, and languages—and they enjoy higher levels of education and income than any other U.S. racial group. Historically, socioeconomic status has been a reliable predictor of political behavior. So why has this fast-growing American population, which is doing so well economically, been so little engaged in the U.S. political system?