The wildly successful Star Trek franchise continues as Capt. Kathryn Janeway and the crew of the U.S.S. Voyager follow a Maquis ship into the Badlands, and one species-saving decision later, find themselves in the Delta Quadrant, 70,000 light years away from the Alpha Quadrant, the Federation, and home. The two ships must join together to make it back, facing treacherous battles from the outside world -- and from within.

In Season 2, the crew suffers from hallucinations and ferrets out a traitor on board

As Season 3 begins, the crew struggles to survive on an inhospitable planet. Later, a time rip sends the Voyager back to 20th-century Earth, where it's mistaken for a UFO.

In the fourth season of the popular Star Trek series, the crew of the Federation Starship Voyager continues on its mission: to find their way home after being stuck in the Delta Quadrant -- 75,000 light years from Earth.

Catch all 26 episodes from the gripping fifth season of this spin-off from the "Star Trek" universe, in which steadfast Capt. Janeway (Kate Mulgrew) must deal with her crew's ennui as they navigate through a void in space where no star systems or galaxies exist.

In Season 6 of this Star Trek spinoff, the crew of the starship Voyager continues its odyssey from the farthest reaches of the galaxy in an epic journey back home to Earth, as Capt. Janeway (Kate Mulgrew) helms the ship through logistical problems galore.

In Season 7, Janeway leads the crew through a fierce fight against the Borg drones; delves into political infighting; wrestles her way out of a void; and, finally, makes her way back home.

Star Trek: Voyager (VOY) focuses on the 24th century adventures of Captain Kathryn Janeway aboard the U.S.S. Voyager.  Smaller than either Kirk’s or Picard’s starships—its crew complement is only 150—Voyager is fast and powerful, and has the ability to land on a planet’s surface.  It is one of the most technologically advanced vessels in Starfleet, utilizing computer circuitry that incorporates synthetic neural tissue.  Ironically, Janeway’s inaugural mission aboard Voyager was to be her last in the Alpha quadrant.  While attempting to capture the crew of a renegade Maquis vessel, both her ship and that of the Maquis were pulled into the distant Delta quadrant by powerful alien technology.  Unfortunately, there would be no similar “express” route to take them home again.  Stranded 70,000 light-years from Earth, Janeway convinced the Maquis to join her Starfleet crew and serve together during the long voyage back to Federation space. -From startrek.com 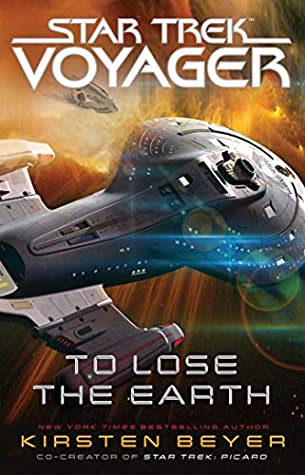 To Lose The Earth

As the crew of the Full Circle fleet works to determine the fate of their lost ship, the Galen, a struggle for survival begins at the far edge of the galaxy. New revelations about Species 001, the race that built the biodomes that first drew the fleet to investigate planet DK-1116, force Admiral Kathryn Janeway to risk everything to learn the truth.

This list is in chronological order. It may not contain some crossover books. If you are interested in reading ones the library does not own you can request a purchase or order them through Interlibrary Loan. The links listed here will take you to goodreads for a synopsis.

The Escape by Dean Wesley Smith

The Murdered Sun by Christie Golden

Ghost of a Chance by Mark A. Garland

Bless the Beasts by Karen Haber

The Garden by Melissa Scott

The Black Shore by Greg Cox

Seven of Nine by Christie Golden

Death of a Neutron Star by Eric Katani

Cloak and Dagger by Christie Golden

Shadow of Heaven by Christie Golden

Day of Honor: #3: Her Klingon Soul by Michael Jan Friedman

Pathways by Jeri Taylor *Owned by the library

Captain Proton: Defender of the Earth by Dean Wesley Smith

Gateways: What Lay Beyond by Diane Carey

The Nanotech War by Steven Piziks

These books are set after the Voyager television series ended. If the Library does not own this book you can request it  or get it through Interlibrary Loan. Links lead to Goodreads.