Voices of San Antonio is a production of the San Antonio Public Library Foundation. It features interviews by Michael Garofalo with prominent San Antonians who have made an impact on the cultural landscape of the City.

Sponsored by the John and Florence Newman Foundation.

In her own words - Macon, Jane

Jane Macon has practiced law for more than 40 years and has the distinction of being San Antonio’s first female City Attorney. She was born in the relatively small Texas town of Kingsville, earning her bachelor’s degree at the University of Texas at Austin and going on to graduate from the UT School of Law. Macon served as the City Attorney from 1977-1983, a time of great political and economic change for our city.

She has been a pioneer for women business and civic leaders from the beginning, blazing a path for others to follow at a time when few women held any real positions of power.

In addition to her law career, Macon is known for her work and support of children’s and civil rights.  In 2016, Macon received the World Affairs Council of San Antonio’s International Citizen of the Year Award, one of many honors received throughout her celebrated career. 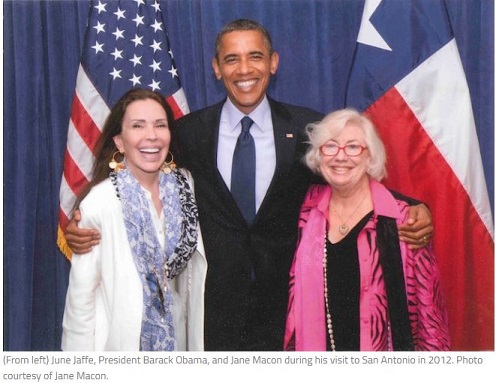