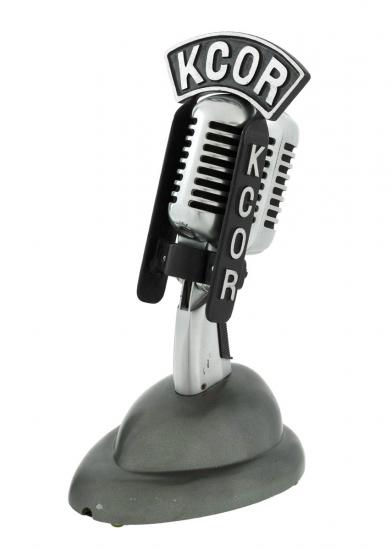 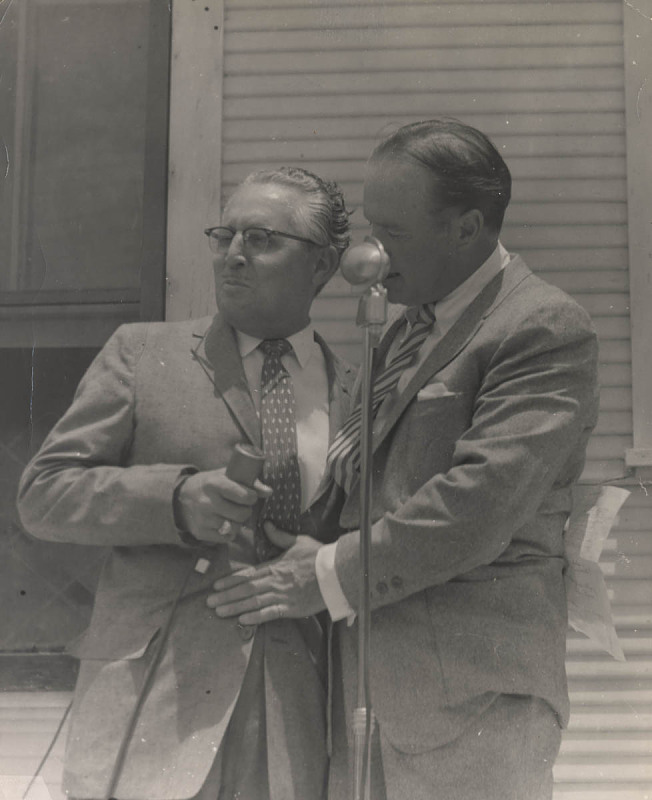 Raoul A. Cortez with Comedian Bob Hope on KCOR, 1950s

In this spontaneous photo, Hope teased Raoul Cortez will at the mic in San Antonio, Texas. San Antonio’s military bases brought many USO performers to the city. 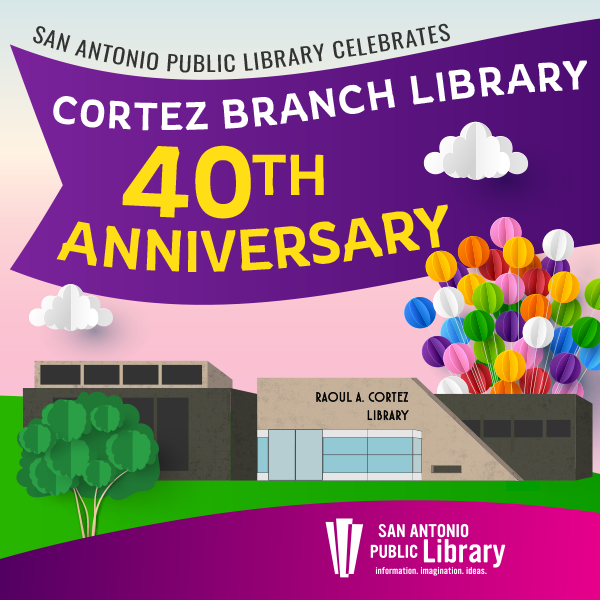 A message from Guillermo C. Nicolas, grandson of Raoul A. Cortez

In 1940 he began negotiating a time slot for Spanish programming on radio station KMAC. In 1944 Cortez applied for a license to open his own radio station. To get around wartime restrictions on foreign language media, he stated that part of the station’s purpose was to mobilize the Mexican-American community behind the war effort. He was granted the license and eventually opened KCOR-AM in San Antonio in 1946, which was the first all Spanish-language radio station owned and operated by a Hispanic.

Cortez was closely involved with the League of United Latin American Citizens (LULAC), a leading national organization promoting civil rights for Hispanic Americans. During his term as director for District 15, which includes San Antonio, he oversaw the Delgado v. Bastrop Independent School District case, marking the end of segregation against Mexican Americans in Texas public schools. In 1948 and 1949 Cortez was elected to two consecutive terms as president of LULAC. In this capacity, he worked with Mexican President Miguel Aleman and U.S. President Harry S. Truman to ameliorate the plight of Mexican immigrant workers through the bi-national “Bracero Program.”

In 1953 Cortez hired respected Mexican radio professional Manuel Bernal who produced commercials and musical programs for the station. A skilled musician and writer, Bernal also composed numerous radio (and later television) jingles. In 1955 Cortez expanded his broadcasting operations to include television when he launched KCOR-TV Channel 41. This was the first television station aimed solely at a Hispanic market, as well as the first to be broadcast on Ultra-High Frequency (UHF). At first the station aired programs only in the evening but eventually expanded to include a variety of daytime shows. Programs produced by the station, such as Teatro KCOR and Teatro Motorola, were written, directed, and performed by popular Tejano actor Lalo Astol, who also had been involved in productions for KCOR-AM. In addition to locally-produced programming, the station aired movies and variety shows either made in Mexico or featuring established Mexican actors.

Cortez’s son-in-law, Emilio Nicolas, Sr., helped run the station and solicited advertising. At the time, it was difficult to recruit advertisers because few television sets were equipped with UHF receivers. Despite vigorous efforts to bring in enough advertising, the financial difficulties associated with being a UHF station eventually persuaded Cortez to sell KCOR-TV in 1961 to a group of investors that included Emilio Nicolas, Sr., and Mexican media tycoon, Emilio Azcárraga Vidaurreta. The new owners changed the station’s call letters to KWEX.

Emilio Nicolas Sr. and a group of investors, including Mexican media mogul Emilio Azcàrraga Vidaurreta and Rene Anselmo, bought KCOR from Raoul Cortez in 1961. Nicolas helped build the fledgling network as the president and general manager of KWEX TV, which became the center of operations for the Spanish International Network (SIN) in 1976.

Cortez died on December 17, 1971, in San Antonio, Texas. He received numerous awards and honors for his groundbreaking work. In 1981 the city of San Antonio named the Raoul A. Cortez Branch Library in recognition of his accomplishments. In 2006 the National Association of Broadcasters (NAB) gave the NAB Spirit of Broadcasting Award jointly to Cortez and his son-in-law, Emilio Nicolas, Sr. In 2007 the professional publication Radio Ink created the Medallas de Cortez to recognize excellence in Hispanic radio broadcasting. Cortez was survived by his wife Genoveva, son Raoul, Jr., and daughters Rosamaria Toscano and Irma Nicolas. In 2015 a new exhibit, titled American Enterprise, at the Smithsonian’s National Museum of American History in Washington, D.C., featured Cortez and KCOR.